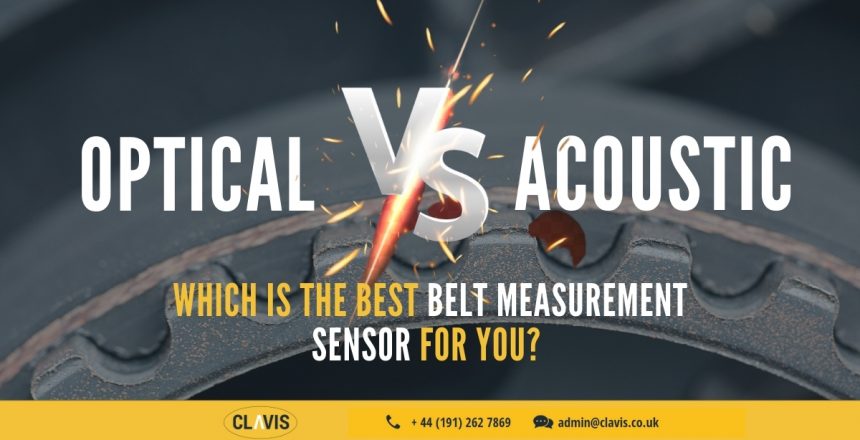 Do you need an extra pair of ears, or an extra pair of eyes. That’s a question our customers face when deciding which type of sensor head they should choose to measure their belt tension. Do they go for an acoustic head, or an optical head? Here, Andrew Punton, managing director of Clavis, explains the key differences between the two.

Belt meters are, without a doubt, our bread and butter product at Clavis. Our company’s origins were in producing acoustic sensor heads, and we also sell optical sensor heads that evolved from our acoustic lines.

In fact, we sell more optical belt meters than acoustic nowadays — but only by a smidge. Our figures say that, since 2012, we’ve sold 8,646 optical sensor heads versus 7,478 acoustic!

But what exactly are the advantages of acoustic versus optical? Which should you choose, and why?

A major deciding factor between optical and acoustic is what kind of access you have to the belt. Some belts are in harder-to-reach places, like 3D printers or electric power assisted steering (EPAS) pumps that are getting smaller and smaller.

If you’ve got plenty of access to the belt — which you’re sure you can position the sensor head at around 90 degrees angle to the belt itself — then you should consider an acoustic sensor head.

Not only do acoustic sensors measure the belt vibrating, they also cancel out ambient noise, so accurate readings can be taken even in noisy environments. The system relies on two microphones. The belt tension meter reads a signal from one microphone, while subtracting certain elements from the other to cancel out the noise.

In a nutshell, acoustic sensor heads have advantages over optical in noisy environments like a machine shop with loud voices, music or machinery in the background.

For instance, Clavis’ own acoustic sensors are used to measure belts in a range of applications including industrial fans, conveyer and gearbox drives, industrial blowers, or quarry equipment like crushers. Also, Predator V-belt drives that are becoming more popular through their ability to drive equal or greater power capacity with nearly half the width or weight of a standard V-belt drive, at less cost. Acoustic sensor heads certainly have a vital role to play in measuring these belts.

But what about measuring belt tension in confined, difficult to reach spaces?

To measure belts in those harder-to-reach spots, you’d probably be better off choosing an optical sensor. For a start, optical isn’t angle-dependent and the sensor can be placed at any part of the belt — including the belt’s edge to give an extra dimension of measurement.

Optical sensor heads can be useful for measuring belts in the smaller, more compact engines we are seeing in the growing markets for EVs and hybrid vehicles. Unlike acoustic, optical units can be used optimally without needing to worry about a “perfect world” situation. In fact, with optical, you can hold the sensor as far away as 100 millimetres from the belt away from the belt, so there’s more flexibility in how you deploy it.

Optical sensors can also be the best choice if you want to go large. In one instance, a customer came to us with a requirement to measure a Gates Predator Belt used in a large chemical plant. In this case, an optical sensor head was the only option for such a large belt.

Clavis’ Type 4 Belt Frequency Meter with an optical sensor head was able to measure the enormous industrial belt. It gives a more consistent and accurate reading than other belt meters — again, this is all down to our testing.

But, if you have minimal access to the belt because of tight space constraints, then optical could be your best choice. For noisy environments, you should choose optical.

Are you still unsure? Then get in touch with Clavis’ team today.