Are micro belts the future? 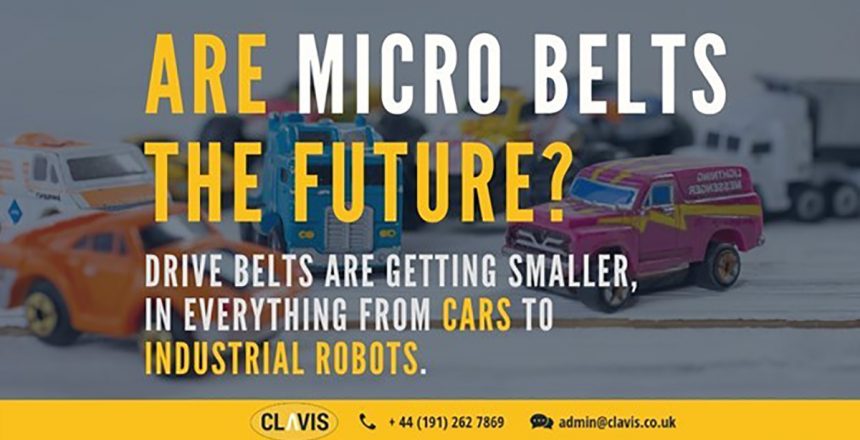 Some automotive media are heralding the death of the manual handbrake. These systems are giving way to new electronic parking break (EPB) systems, many of which rely on expensive internal components. To reduce these costs, small belt drives are coming to the forefront of new EPB motors. Here, I explain why belt tensioning these micro belts will be essential.

In the UK, just 37 per cent of new models are now fitted with manual handbraking systems according to research by CarGurus. This means that seven out of 10 new cars come standard with an electronic handbrake. Given that manufacturers including Lexus and Mercedes — and others that Clavis have worked with like Jaguar, Land Rover and Porsche — have eliminated manual systems from across their production lines altogether, this percentage will continue to fall.

Those companies now only sell cars with electronic or foot-operated parking brakes. Here, we’ll focus on electronic systems, which surely have their advantages. Those include greater assistance for hill starts, and there’s less chance of them not being set firmly when people park on steep hills. As the tech becomes more common, some predict that manual handbrakes will go the same way as manual chokes — and that, one day, nobody will miss them.

“Manufacturers including Lexus and Mercedes — and others that Clavis has worked with like Jaguar, Land Rover and Porsche — have eliminated manual systems from across their production lines.”

However, electric handbrakes are expensive for original equipment manufacturers (OEMs) and the cost still needs to come down, significantly. One way to achieve this is to replace the expensive mechanical gearing within an EPM motor, and replace it with a belt drive — or micro belt drive — configuration.

But how? One answer relates to the micro belts used in these electronic systems. I’m calling them “micro” because they’re the smallest size of belt that Clavis has dealt with, so far — in more than 30 years of business! With our new 3 mm micro optical sensors, we can accurately measure belt frequency of these micro belts.

Take, for instance, a client of ours that’s developing an electronic handbrake with a belt-driven motor. The product has yet to go into full production, and is in its final development stages. In this instance, Clavis produced a rapid prototype for this client to enable them to conclude this product development. This was so successful it was immediately purchased.

Another example of application using micro belts has come from another customer that wants to measure robot belts. When they shared the dimension of the belt, it turned out they are especially small in terms of length rather than width. So, I automatically offered to design three custom sensor heads for them!

This has resulted in three options, or choices of optical sensor head, for the customer that we’re calling Type 16, Type 17 and Type 18. Types 16 and 17 are 3 mm-narrow sensor heads with, and without respectively, the amber LED. Type 18 is a thinned-down version of our standard optical sensor head.

Generally, optical sensor heads are preferable if you need to measure harder-to-reach spots — you can read more about that, here. Optical sensors aren’t angle-dependent and can be placed at any part of the belt — including the belt’s edge — for an extra dimension of measurement. With optical, you can hold the sensor up to 100 millimetres away, depending on the belt.

“Better tensioned micro belts perform with greater efficiency and keep down overall costs for OEMs. If manufacturers save two or three Euros per unit, this can add-up to significant savings when they’re building a million units a year.”

We’re waiting for these customers to choose their preference from Types 16 to 18, based on the prototypes we’ve sent them. We can then modify the design to suit their unique needs.

We’ve already got the solution designed and ready to roll. That is adaptable across all different applications. So, now we have the solution, we can offer it to other potential clients, too.

Which brings us to the cost savings. Even if they are “micro”, better-tensioned belts perform with greater efficiency to keep down the overall cost. OEMs will be looking at ways to save money in their production of electrical handbrakes and, if they save two or three Euros per unit, this could add up to significant savings when they’re building a million units a year.

This certainly makes optimal belt tension, and Clavis’ belt tension measurement solutions, worthy of further investigation. Then they can embrace so-called “death of the manual handbrake” as profitably as possible.