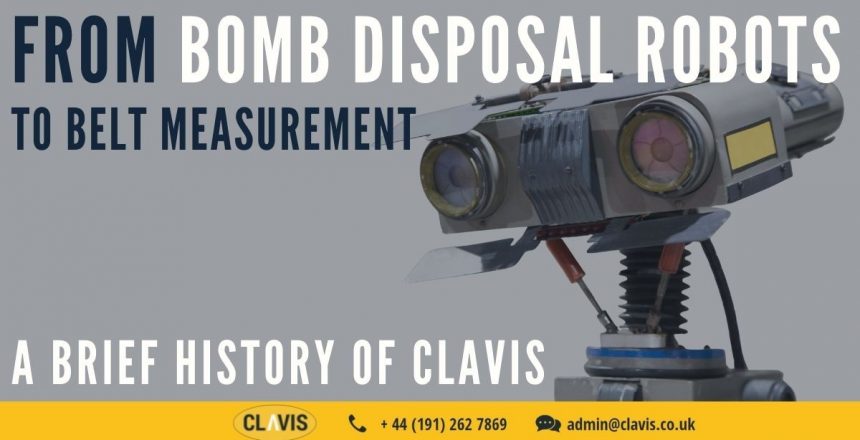 Today, Clavis specialises in advanced belt tensioning measuring instruments, advanced handbrake setting equipment and a fully-traceable device that detects automotive clamps closures in 0.3 seconds. But, if you think that’s all we’ve done, think again. Here, I explain how bomb disposal robots, a fateful call from Ford Motor Company and roughly 36 fire engines brought Clavis to where it is today.

The clue to Clavis beginnings are in our name: Integrated Design Systems. Back then, in 1980 and onwards, we designed and manufactured LED display panels primarily for airports and train stations that displayed the arrivals and departures. Our company was founded on a solid grounding of electrical engineering expertise, but who could have guessed where this would lead next?

Clavis’ next big thing was — believe it or not — manufacturing bomb disposal robots for the armed forces. The robots had shotguns attached to them to explode the bombs, plus a camera, and we built them from top-to-bottom, apart from the outer shell that we got from a local company. A big customer was the Canadian government that wanted its robots painted in white to camouflage against snow. These robots were advanced for the time — around 1986 — but they would open a vital door of opportunity.

Around this time, we were asked to investigate the noise spectrum of armoured fighting vehicle tracks. Our findings showed that one component was related to the track tension: the belt. This, plus the electrical engineering principals behind Clavis’ bomb disposal units, would go on to inform our early belt meters and belt tension devices.

“At one time, a big Clavis customer was the Canadian armed forces that preferred its bomb disposal robots in white and red to match their national flag!”

Back then, force displacement gauges were mainly used for measuring belt tension. Instead, Clavis’ idea relied on a whole new concept: using acoustic sensors that actually listen to the acoustic noise of the belt to determine the frequency of the oscillation using electronics. One microphone cancels out the ambient noise, while the other microphone measures the actual noise of the belt.

This method was the birth of belt measurement, patented by us in 1988. Clavis began working with Ford Motor Company and other manufacturers with belt applications. For a while, there was even talk of Ford cars coming with our belt meters as standard! Over several years, belt meters would grow into Clavis’ “bread and butter” with us manufacturing devices for SKF, Goodyear and Contitech in large quantities, plus a “super rugged meter” for the military that has its own NATO stock number. And, since 1998, every Ducati motorcycle engine has had the timing belt tension set with Clavis equipment.

The coming years would see us build our own AC motor-driven chorded power tools, the kind you find on automotive production lines, which is today no longer necessary as we use tools by the likes of Atlas Copco and Stanley. We also manufactured automated industrial refrigerated doors. This is simpler than it sounds, being essentially a printed circuit board (PCB)-based sensor system that fit on factory doors so they opened and closed automatically when, for example, a forklift approached.

“Clavis’ industrial closed-loop systems were very innovative for the time, and at one point were used in every Ford factory in the UK.”

Another major step happened in the early-‘90s, when we began manufacturing industrial closed-loop systems for Ford and Renault. Clavis manufactured a fixture that would fit onto an engine equipped with acoustic sensors to detect the belt vibration, and was automatically adjusted by winding it down. Our industrial closed-loop systems were very innovative for the time and, at one point, were used in every Ford factory in the UK. Jaguar Land Rover, too, relied on these systems to tension front end accessory drive (FEAD) belts on their engines.

What came next may sound like another tangent: breathing apparatus (BA) systems for the fire service! But, in fact, Clavis’ owner at the time was a passionate collector of fire engines — owning up to 36 at one point, including one shipped for South Africa. Clavis’ so-called BA board displayed data counting up how long the firefighter had been near the fire or counting down the amount of oxygen they had left. I actually spent a whole week on the Isle of Mann inspecting and repairing this systems.

Around 2001, we received a fateful call from Ford Motor Company. A big lawsuit had arisen in the US when a faulty handbrake caused a car to roll down a hill and, unfortunately, there was a fatality. The call led to Clavis playing a crucial role in the first Ford handbraking system to measure cable vibration.

since 1998, every Ducati motorcycle engine has had the timing belt tension set with Clavis equipment.

Since 1998, every Ducati engine has had the timing belt tension set with CLAVIS equipment.

Our engineers devised a way to measure the handbrake, then a bare cable, using a magnetic pickup. By adding a hammer to automatically vibrate the belt, closed loop belt tension setting was possible and the equipment was branded under the name “CLAVIS”. It became widely used in vehicles like the Ford Galaxy, the Jaguar XJ and went into most Ford plants worldwide.

Clavis might not manufacture bomb disposal robots anymore, but our handbrake measuring systems continue to evolve. Today, they use a spring-loaded sensor pin which remains in constant contact with the brake lever. Meanwhile, our belt tension measurement systems will prove essential as longstanding customers like Nexteer and ZF start to introduce composite drive pulleys to their electric power-assisted steering (EPAS) units. These systems present complex challenges the belt now vibrates at multiple frequencies, which is where Clavis’ FourierBMS system offers a vital solution.

Clavis has come a long way from our beginnings manufacturing LED display panels for airports. But it goes to show that, through expertise combined with a real dedication to solving customers’ needs, it’s possible for a small-medium enterprise (SME) like our to change how manufacturers operate on a global scale. Book a consultation with me today to learn how you can benefit from our expertise.